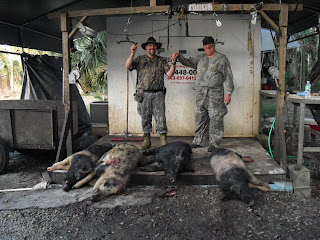 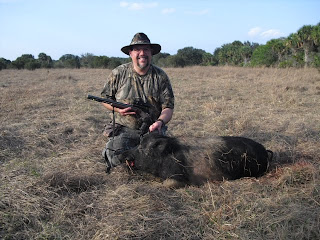 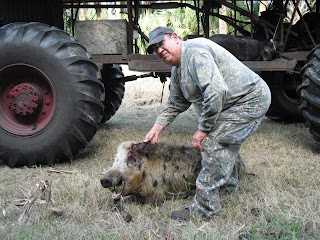 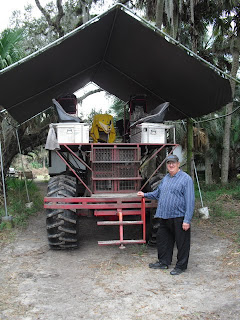 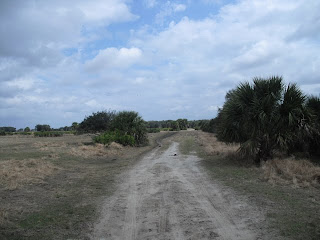 The past deer season has been rough. In fact, the past two deer seasons have been rough to say the least. This is one of the longest stretches when our families went without any venison. As a rule we would take two to four deer per season. We had a real hot spot but as with all things time changes things. It has been a long year and we deserved a good vacation. My parents would like to enjoy some gold in their golden years thus I had arranged to obtain a rental home in the Melbourne area. They were vacationing for a couple of weeks before Mary and I headed down for a two week respite from the daily grind of life.

The trip wasn't too bad going down and we spent a whole day in the St. Augustine area before going south to Melbourne. We say many sights including three days at Disney World , airboat rides and seeing the beaches. One negative that we ran into was that Florida was experiencing it's coldest winter since 1958. I did wade into the ocean at Indiatlantic Beach but it felt like the water in Maine. It was quite chilly.

I conducted a number of searches on the internet for a place to hunt wild hogs. Florida has some of the best wild boar hunting in the United States. Florida has over one million of these animals inhabiting most parts of the Sunshine State. To be honest the best hunting is found on private land. It is hard for some of us raised in a place where if land was unposted you could just go hunt on it. Florida is very different. Most of the hunting on private land involves a transaction of some sorts. So in other words you are going to pay to hunt. There are many guides, outfitters and clubs that offer all types of hunting at different rates. Some are astronomical while others are very cheap. As the Romans stated, let the buyer be aware.

I found a place called L and R High Adventure who advertised very reasonable wild boar hunts. I discussed the hunt with Dad and he was all in favor of it. He had never hunted wild boar before in his life. For me this would be my 8th hunt for wild boar. This hunt would be a tad different in many ways. For one, my father would be joining me. Another is that I would be using a muzzleloading handgun. I bought a Thompson Center G2 muzzleloading rifle barrel in .50 caliber a while back. I had a local gunsmith cut and crown the barrel to 16 1/2 inches. I can use this barrel in the form of a carbine or a specialty handgun. I mounted a Tasco Propoint optical sight on it. I spent some time at the range which included shooting some different types of bullets at water jugs to test some bullet performance. I settled on using two Hodgdon Triple 7 pellets with a 240 grain TC XTP sabot bullet. In my barrel it is accurate and from testing on the water jugs it seems to have the power needed to take down these animals.

Dad thought about using his crossbow but he did not feel that he had enough practice with it to be proficient. He decided to take his H&R single shot shotgun with the 12 gauge slug barrel. He used Winchester Western 385 grain sabot slugs as his hunting load. His gun as well is mounted with a Tasco Propoint optical sight.

We drove south from Melbourne down Rte 95 and then west on Rte 60 towards Yeehaw Junction. The drive from Route 95 to Yeehaw Junction is very bucolic. Orange groves and pasture was the dominant feature in this area. As far as the eye could see it seemed to be an endless vista of citrus. At Yeehaw Junction we turned south on Rte 441 to the town of Fort Drum. This drive to me was going through the real Florida. Don't get me wrong, I enjoyed many things in the Sunshine State but I sort of bemoan the overbuilding that has happened in the past few decades along the coast. To me, the movie based on Marjorie Kinnan Rawlings" The Yearling" will always be what I consider to be the real Florida. We passed through Fort Drum and then went down one of the roads and then to the entrance of the ranch. I spoke with the guide and agreed to meet him at around noon time. We found the place and waited. The operation covers approximately 2000 acres of divided pasture. The main way to hunt in such a place is to drive though the pastures on a large swamp buggy.

Dad and I met the guide and we then headed out. We hunted these animals with the aid of a dog. The guide , Robert, owned a cur dog which would basically flush out these animals. We drove around and he let the dog out of a special cage under the buggy. Bear in mind that the buggy is very tall. Almost like a double decker bus in some ways.

One of the things about wild boar is that they like to hide in the palmetto thickets. They can be literally feet away from you and you will not see them. As we drove one was kicked out. The dog then would keep the animal busy while the hunter would ready himself for a shot. The dog followed the boar and would run and bite the tail. The boar would turn and lash out at the dog. The dog was very adept at running around the hog. As the boar was being bayed I stepped down from the buggy and readied my gun. The guide motioned for me to enter this thick palmetto grove. Soon I spotted the boar. It was broadside . The guide instructed me carefully as to when I could shoot. He was worried about the dog being hit. In fact I was worried myself. Before we hunted we had to sign an agreement. If we accidentally shot the dog, it would cost us $2000. The same was true if we accidentally shot any cow or $5000 for a bull. I suspect that this has happened in the past. I broke the action of the TC Contender and slipped in a 209 shot shell primer. I snapped the action shut and readied myself. I placed the red dot on the front leg of the animal and went up halfway in the chest. I squeezed the trigger and the hammer fell. I cloud of white smoke obscured my view momentarily as I peered through the red dot sight. The boar started to move off but not for long. The animal faltered and fell. I was elated at taking this nice wild boar. Soon we dragged the boar to the buggy and loaded it up on the rack. The animal was quiet heavy and had some nice tusks. Dad was smiling at the event. Soon we took off. Now it was Dad's turn. We drove and and went looking. We would listen for the dog and then drive off to where it was. As we drove we found where the dog had jumped a large spotted wild boar. This boar was very big and it looked more like a hyena than a boar. My Dad decided that he wanted to take it. The boar took off and was held at bay in another palmetto thicket. It seems that the boars will seek out some sort of thick cover when they are pursued. My Dad climbed down from the buggy and readied his shotgun. What happened next I can't say for sure but soon I heard a shot ring out. Then another. My Dad had his first wild boar. Later Dad told me what happened. He was getting ready for the shot but there seemed to be some miscommunication. Robert the guide did not want you to shoot until he gave the ok but he did want you to aim and be ready to pull the trigger. Again he is worried about the dog and frankly he doesn't really know us. Robert called the dog off and the boar moved at the shot . Dad quickly reloaded and fired a killing shot. There isn't much that will not fall to a shotgun slug.

That wild boar was left in place as we had two more to get and we didn't have enough room. Now it was my turn again. I was gaining some confidence with the new barrel. I wasn't sure how well it would work but after one boar being dropped I figured it had all of the power needed to take large game cleanly. We then took off and soon kicked up another wild boar. My father was going to take this one. Yellow, the cur dog was off and running. He was keeping one large boar busy and trying to bay the animal. The boar ran after Yellow but he was a bit faster. He would run a couple of circles around the boar and bite him in the tail or neck depending on which way the boar was headed. The boar was near the edge of a cattle fence and was starting to run. I was nervous at taking such a shot but it seemed to be the only option. The boar was a good sixty yards when I settled the red dot on the chest. Again as the hammer fell a plume of white smoke enveloped the view. The boar ran back towards us about twenty yards and fell down. A nice boar lay at our feet and again I was elated at the shot. My Dad and Robert said as the boar ran it was spurting out a continuous stream of blood. A sign of a good hit. Hmm. I am getting to like this muzzleloader handgun hunting.

Now it was Dad's turn. We took off an again it was time for Yellow the cur to do his job. We soon spotted another large boar with a white band. This boar was holed up under some brush and soon ran out. Yeller then held the animal at bay until Robert the guide called him off. Soon a shot rang out and the boar dropped instantly. We got down and the boar was still living. I was asked to finish it off. The muzzleloading handgun eliminated any suffering the boar had.

The next job was to haul the animals off to the work table where they were skinned and quartered. We filled up the coolers and left. Robert was an excellent guide and decent man. We had a great time and we had a lot of meat. On the ride home we stopped at Yeehaw Junction and obtained the much needed ice for the trip back to Melbourne.

All in all Dad and I had a wonderful time. We're thinking about doing this again next winter if all goes well. In a way hunting wild boar in Florida is an ideal vacation for all. The success rate is very high and you can combine it with a family vacation as most of these hunts can be done in one day. The next time I want to go for at least three days to get away from it all, so to speak. It was a fun hunt but in a way too quick.