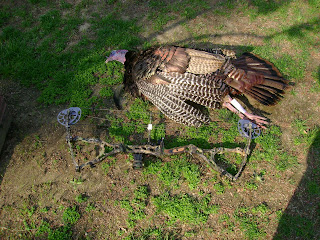 I am an avid turkey hunter. I started hunting the big birds when I was old enough to obtain a license. My first hunting experience was in the state of Vermont when I was thirteen years old. In all honesty, we were clueless. We had no idea how to hunt the big birds. We made many errors and after a short time became aware of how to hunt turkey. There is a methodology behind hunting wild turkey. It is almost a symphony of events when you do it the right way. Roosting the bird the night before. Entering it's realm in the wee hours of the morning to get into position. Listening for the gobbler fly down and begin his day. Making those first calls to entice the bird. The patient waiting game for the bird to come within range . In a strange way it is almost like dry fly fishing.

Over the years Dad and I have taken some nice birds but all with a shotgun. Here in Massachusetts you are allowed to use a shotgun or archery tackle. One day I'd like to take a bird with a handgun in a state where it is legal but that will have to wait. Today was a first. It was the first bird taken with the bow and arrow.

One of the facts of life in the northeast is the loss of hunting habitat and encroachment of humanity in many of the wild places I had grown up in. It is not an easy thing to deal with at times. You see a wonderful old farm becomes a development. You recall the hours of bliss that was attained in what is now someones back yard. One way to deal with this change is to adapt as much as possible. One thing that has happened is the increased opportunity for the use of archery in many places that do not allow the discharge of a firearm. One such place is where I had hunted with my Dad. A close friend of mine has a farmette for a lack of a better term and has graciously allowed me to set up a blind in his small field to bow hunt for the big birds. The turkey would come off of a roost and then start to forage in his field. I set up my blind in the middle along the edge of the field. I set out two decoys and was ready.

Opening day came early. One of the exacerbating things about turkey hunting is that you need to get up very early for hunting in the spring. In some ways deer hunting is easier. I am blessed with the opportunity to hunt after work each day if I choose. I can get a bit of sleep during deer season but not during the spring turkey. There is no afternoon hunting where I am so I suffer in that one area.

This year's opening day would be worth whatever perceived suffering I was about to undergo. I heard gobbling at the break of dawn. Not much after five in the morning did I hear the first sounds of spring. I was ready. I figured that calling should be very low key. That technique worked beautifully well. Shortly a flock of hens were all around me. I noticed one thing with the blind. The turkeys seem to be oblivious to the fact that there is someone in there. I had the hens walk by a few feet away from me. One thing to bear in mind is to make sure you wear all black when hunting from a blind. You want to blend in the shadow of the blind itself. It works well.

It was at approximately 6:40 AM when to my left a gobbler appeared. He was a nice bird in full strut as he was trying to impress the ladies. He strutted out to my twenty yard marker and I drew back my Bowtech Guardian. I placed the sight pin on his wing area and loosed an ST Axis arrow tipped with a 100 grain magnum Slick Trick broadhead. I heard the distinctive sound of the arrow hitting the bird. He flew up a bit but soon fell to earth. He tried to move but was unable to do so.

What happened next was really odd. All of the hens that have now moved to the center of the field came to see him. The lead hen stretched out her neck and had the look of concern. She led the other hens to the downed gobbler. She pecked at him once but it didn't appear to be a hard peck. It was almost as if she was checking him out. Shortly two other gobblers appeared and they approached the downed bird. Bear in mind this is all happening in the time span of all of fifteen minutes or so. They gobble in unison and soon leave. I contact my father on the FRS radio and he arrives. The birds leave which is what I wanted them to do. I didn't want the birds to see me get out of the blind.

I went over to get my bird. It was a magnificent bird taken with the bow. The bird dressed out at 18 lbs and has a 9 inch thick beard. He had 5/8th inch spurs. This will go on the wall in some what shape or form. A fine trophy in my eyes .
Posted by JohnW at 6:11 AM 3 comments: