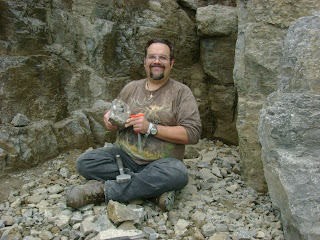 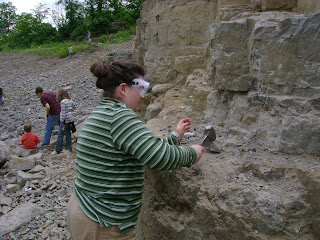 One of the things that intrigues me besides hunting and the outdoors are minerals. I have a set of gold pans that I have used much to my dismay in the White Mountains of New Hampshire. About the only time I had ever obtained anything was a small rice grained sized sapphire in Idaho on one of my summer trips.
A while back I was watching a show on the Travel Channel hosted by Kirsten Gumm. This young lady travels all over in search of minerals and other collectable earth deposits. She had one show on a type of crystal found in upstate New York. Just north of Rte 90 is the sleepy town of Herkimer. This location is famous for it's quartz crystals called Herkimer diamonds.
I decided that Mary and I needed a vacation to that area and planned a simple camping trip. I made arraingements to stay at a KOA in that town which has the diamond mine. I know that Mary isn't too thrilled with tent camping so I opted for renting what are called Kamping Kabins. Basically this is a small log cabin without any amenities. You take everything you need to camp except the tent. I figured that this compromise would be the best of both worlds, not to mention cheaper than staying at a motel.
We drove to the site on that same day and set up our cabin. It was very clean and cozy. The way the system works is that you pay a day use fee to Herkimer Diamond mine and rent the tools. You have to buy the chisle as it gets a lot of wear and tear. What I learned is that this place is a working mine. The owners commercially mine it for the large crystals and then people are allowed to glean through the rest. I will be honest, it is a lot of hard work. You are trying to crack off peices of dolomite with a hammer and chisle. This takes a lot out of you and you will be somewhat dirty. I'd wear old work clothes when doing this. Quite a number of people went along with some school groups.
To make a long story short we obtained a small amount that is probably worth around eighty dollars. Again, you're not going to strike it rich as much as collect something to make some jewelry with or have a souvenier. 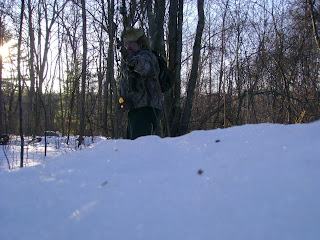 It had been a long day at work. The stresses of working with teenagers in recovery can be very exacerbating to say the least. They can test you in many ways. I have learned that you need to take a low key approach and you must have a sense of resiliency when dealing with many of the verbal comments made. It is the nature of the beast, so to speak. One of the things that I have learned is that you need to have an outlet for that tension. For me, hunting has always been that safety valve that allows me to unwind and not just become an observer in nature but a participant.

After work I went to my truck and got my bow. It was a cold day in January. In fact the temperature was around 4 degrees F and a touch of a breeze to bring the windchill below zero. I wasn't too serious about taking a deer in January. Rhode Island has a late archery season which extends to the end of the month. It is tough because the deer have been pursued by archers, then muzzleloader hunters and finally the shotgun hunters. After that in January the season picks up again with archery. I know very few deer are taken since many hunters are exhausted and not willing to sit in a stand when it is near zero or less. That can be a real test of intestinal fortitude.

Oddly I just wanted to walk and maybe take the chance of seeing a deer. I walked down the path wearing my green wool pants, an insulated camouflage shirt and my coyote fur trappers hat. That hat is incredibly warm. To be honest it is uncomfortable unless you are in near zero degree weather. I walked through some overgrown meadow and followed some tracks. The blanket of snow revealed the signatures of everything that was living in the woodlands.

I walked slowly and steadily as I followed a set of tracks into a small white pine grove. There I found an old bench. Someone must have set it up for hunting. Since no one was around I sat and rested. I contemplated life and what I do for a living. I was tired and actually closed my eyes for a few minutes to get some needed rest and relaxation. As I sat there I looked forward. I can't believe my eyes. It was a deer. Soon I saw three does walking towards me. I remained motionless and they seemed very ambivalent to my presence. How ironic. I hunted hard that year and was rewarded but I never thought I would have the opportunity again so late in the year.

I sat and watched. It was around 4:00 PM. They milled all around me. I could not get a clear shot since I did not anticipate deer coming by but in a way I didn't want to shoot. I had two freezers filled with meat and I knew at this time of year those does were carrying young. If one of them were a buck I would have attempted the shot. At that time their antlers would have dropped off. I know that the Rhode Island fish and game department is wise in allowing the season this late for population control but for some strange reason I didn't want to shoot. The deer came as close as ten yards. I sat motionless wearing my big coyote fur hat. I surmise that it broke up my outline and they weren't sure what I was. Soon one deer looked at me with great scrutiny. She would bob her head and weave it all around like does will. Soon the other two were alerted and then there was the sound of air. When deer are alarmed they "blow". A sudden rush of air signals that there is danger and you need to vacate.

Soon all of them took off and I figured it was time to head home to a hot meal. I walked back in the January cold with a warm feeling.
Posted by JohnW at 8:33 AM No comments:

Ok. The title of this is going to sound really strange to the non hunting public. I had learned of this technique of baiting predators from a hunting forum. Here in Massachusetts we can bait for predators and hunt at night provided that we don't use a light source. To me that is silly as a light would aid in target identification but the powers that be fear people would illegally shoot deer. Personally speaking, I don't think so. Those people will do it anyways.
The way to use a meatcicle is to take a five gallon food grade pail and spray the inside with PAM or other non stick cooking spray. Put in meat scraps about one third of the way up and then fill it with water. Let it sit overnight to freeze and then bring it to your stand location. It is pretty simple to use.
I have set up a Trail camera to record what manner of wildlife would come to my meatcicle at one location I hunt in. So far the only animals that have approached it were red and gray fox. crows and a fisher.
Next winter I plan to set up a couple more meatcicles in the hopes of attracting a coyote. We'll see how well it works.
Posted by JohnW at 8:22 AM No comments: