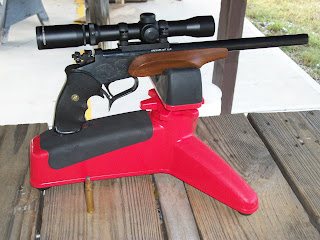 One of my great passions in life is hunting and if I were limited to one thing it would be with handguns. There is something different about hunting game with a limited range firearm such as a scoped revolver or single shot handgun. I know some people are very passionate about hunting with a bow or a muzzleloader but for me it is the short gun, so to speak.
This year I was picked for a NH moose permit. Ironically I became aware of the news the day before I got married. Hopefully this is an omen of good. I was contemplating as to what to use for this hunt. The zone is north of Concord and basically a wedge of land between Route 89 and 93. In a nutshell, a very tough area to hunt. Many people think that moose hunting is a pushover. Well I have been blessed by going on two hunts and they are far from being associated with shooting a milk cow in a pasture. Bear in mind that a moose is the largest member of the deer family, so they are a big deer and deer aren't exactly stupid. Add the fact that I am using a limited range weapon and you create a real challenge.
One of my favorite rounds is the old 45-70. Many years ago I bought a Super 16 barrel in that caliber when it first came out. I had taken many different types of game with it and would probably use it this season but the locking lug cracked on it. Off to the factory for repairs which seem to be taking an inordinate amount of time. Since I have less than a month to get good with a specialty hunting pistol I had chosen a different barrel.
Several years ago Thompson Center would hold their annual tent sale in June. I loved it in the fact that you could by a lot of things at cost. One year I had to work so Mom and Dad went to get a birthday barrel for me. Mom is a great haggler and in a nutshell she obtained a brand new .375 Winchester Super 14 blued barrel for $80. That fall I shot a nice black bear in Maine with that particular barrel. I did have some other plans for it. A man named Mike Sirois in Dover NH ran an outfit called OTT. He rechambered gun barrels using an EDM process. This process involved machining an electrode that would erode a chamber in a barrel vs. a cutter. The result is a barrel that has great concentricity and accuracy. I had him rechamber the barrel in 375 JDJ. For licensing purposes he marked my barrel as 375x444.
That year my mother was chosen for a NH moose permit and she allowed me as subpermittee to hunt. It was a rough week and I did get one small button bull towards the end of the hunt. The 375 JDJ dropped it in its tracks.
For a short time TC made the 375 JDJ as a standard caliber and Hornady made factory ammuniton for a few years. They loaded up a 220 grain flat point at 2200 fps. Across my chronograph the factory ammunition ran 2230 on average out of the 14" barrel. I never handloaded for it until now. Hornady discontinued the caliber as well as TC except for custom shop chamberings. Too bad as it fills a gap.
I took a Leupold Double Dovetail base and epoxied it into place. Screws tightened down and secured with a Burris 1.5 x 4 power handgun scope mounted in place. I did some shooting at the range at after sighting in at 100 yards it basically will do a 1 1/2 inch group with three shots. I will confess it has some recoil. My first shot taught me a lesson to be aware of my elbows on the bench. At the shot my elbow was driven into the weatherbeaten wood. Ouch. After zeroing in at 100 I decided to give it a rest. I have thirty factory rounds left. I will dedicate those for hunting while taking the rest of the empty brass and load them up for some practice. Hopefully I will be in shape for the opening day in October. It is coming soon.
Posted by JohnW at 5:44 PM No comments: Links to this post