New toy for the winter(221 Fireball) 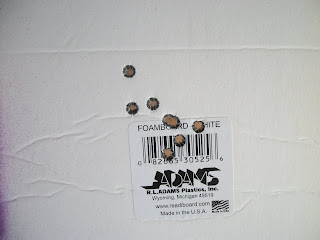 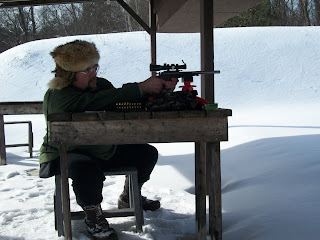 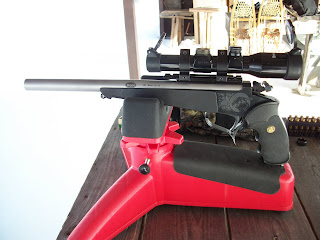 It has been quite some time since I had posted on this creation. One of the realities of modern life is that computers can be a double edged sword. Don't get me wrong about them. I like to surf the net and post on various forums but the use of the computer has increased at my job. More of my time is found behind a screen for various purposes and what seems to happen is that when you have spare time you would rather not spend it with something that you use at work.

Today I did some shooting at our club's range. Maybe I overthink things but I wanted to do some varmint hunting this winter. One of the best ways to take them in the northeast is to hunt over a bait, especially at night with snow cover and some moonlight. Many hunters in the northeast have been successfully taking coyotes over buckets of frozen meat scraps nicknamed meatcicles. Here in Massachusetts you can shoot varmints with any centerfire rifle or handgun during shooting hours. After the sun sets, it becomes a different matter. The law states that you are restricted to rifles no larger than .22 lr or handguns chambered larger than .38 caliber. To my thinking, the statement caliber means bore size and I figure that a TC Contender with the right optic and the right caliber would be the right combination to use at night over bait and yet fall within the law. It seems odd that I bought a Contender barrel chambered in .221 Fireball but my rationale is that it was originally designed as a handgun round and it is under the .38 caliber restriction. Trust me, I have talked to a number of law enforcement officers and many were confused in this arena. I figure that by following the letter of the law I am AOK.

So far this winter has been pretty snowy. We had two storms in a row and it appears that later this week we will have another. I donned my snowshoes and trudged to the pistol range. Normally it is plowed out but we had technical difficulties.

When I bought the barrel, which was used, it came with a set of reloading dies. All I have to do is collect brass for reloading. I called up my friend and asked if he had any on the shelf. That was affirmative and so I picked up two boxes of Remington 221 Fireball loaded with a 50 grain Accu Tip bullet.

As a rule if you have a really accurate barrel such as this one made by Match Grade Machine you would put on a nice variable handgun scope like a Burris 2-7 or 3-9 but this barrel has a special purpose. Oddly I mounted a now out of production Tasco 1.5 x pistol scope. This scope has a post and cross hair reticule with the tip of the post illuminated with a three position switch. This reticule isn't the best one for MOA accuracy but I don't believe I will get too many shots outside of the fifty yard mark. Most of the terrain where I hunt is thickly wooded. You aren't going to get the same long shots that one normally associates coyote or other varmint hunting like the Great Plains.

I had sat down at the bench and fired a few rounds. A quick adjustment of the turrets and the barrel was dead on at 25 yards.As you can see the group isn't too bad. Bear in mind that it was a very cold day and we're expected to have three nights of below zero temperatures. Ok. I know that it should be at least fifty yards but I really didn't feel like trudging through all of that snow at the rifle range carrying all kinds of stuff. Quite possibly tommorrow will find me at the rifle range shooting at a greater distance to fine tune the barrel. Right now I am happy with it and what would make me happier would be to find something like a coyote in my range. Take care.