Experiences in a yurt. 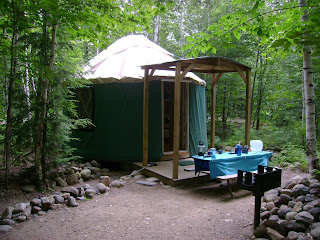 I have always been fascinated by this unique form of portable dwelling developed by nomadic peoples living on the steppes of Mongolia. The yurt , or more properly called a ger, is similar to the American Indian tipi found in the Great Plains of North America. I have contemplated ownership of a yurt after reading many positive articles on the structure. How it is efficient, wind resistant, relatively low cost compared to a more permanent structure and lets be honest. There is a sort of "cool " factor involved with a yurt.

Mary and I were in need of a break and wanted to get away from things for a short period of time. I don't have the time off like I used to. One of the things that I sorely miss from public education is the summer vacations. You needed that time off to recharge your batteries, so to speak. Now I don't have that option. Ok. I know that sounds a tad bitter and it is but such is life.

Mary doesn't like camping all that much. She made the statement," I tolerate it" is the best way to describe it. The biggest issue of all is the cleanliness of the bathrooms. Many places we have stayed at do not clean the bathrooms and showers very well. Well, I don't want to get too off topic so here is what we can say about the yurt.

I'll not belabor any details but in a nutshell I discovered a number of downsides to the yurt. In the summer the shelter can get very hot and stuffy unless you open up all of the windows. This model had three windows and that brings up another problem. The flaps that cover the windows are on the outside. So in order to get fresh air you need to go outside and roll up the clear plastic and the green fabric and secure it with the velcro tabs. Now the problem is that people passing by can look in. In addition, if it rains you need to go outside to close the windows. The White Mountains recieved about two to four inches of rain on Thursday night thus necessitating the closure of one window. The sound of the rain pounding on the roof was very loud and did have the effect of lulling one to a state of sonambulism. Mary noted that at the roof and wall juncture there were a couple of gaps that insects could make their way in. I did get bit by no see um midges a couple of times but no amount of screening would stop them. The roof is supported on a spoke pattern of what appear to be 2x3's and the walls are supported by a lattice work. The roof is held on by a cable that cinches around the top of the wall similar to a hatband. It is there where a gap or two could lead to some problems.The yurt is very bright. The roof has a skylight. Traditionally this was an opening in which the smoke from a cooking fire would waft upward like a giant chimney. I have seen images of yurts with woodstoves so that is one way to heat a yurt when it is cold outside. The skylight on this model had a clear plexiglass dome. The owners put an opaque tarp over the top of it. I suspect that is necessary in order to keep it from overheating in the summer. Again, we found it to be very hot when we first arrived. I thought that this shelter would be comfortable in mid to late September or early October. One thing that Mary noticed was that the skylight needed cleaning. It was full of dead bugs. In a nutshell the yurt is a step in between a tent and a cabin. For ten dollars more I think you would be better off with a cabin.

I am somewhat of a dreamer. I have thought of owning a small campground in Maine or New Hampshire as a retirement business of sorts. In addition to some sites for tents and RV's it would be nice to have a couple of yurts. I am not sure if this daydream will ever come to fruition but I do believe one needs to have more experience in order to make such a decision. We had stayed in a yurt for two nights and both concluded that there are a lot of downsides to the structure. So if this dream ever comes true, I don't believe we will have any yurts available.